It is twenty five years ago that the first baby from a frozen embryo came into the world. Zoe Leyland was born at the Queen Victoria Medical Centre in Melbourne, Australia on 28 March 1984, helped on her way by Dr Alan Trounson and Dr Carl Wood who made medical history. The decision to try 'test tube' fertilization and embryo freezing was taken by them and Zoe's parents – mother a 33 year old New Zealander and father a 38 year old British born Australian resident. Her mother had hormonal stimulation and produced eleven eggs which were frozen using a then new type of controlled rate freezer made by London company Planer plc. One of those frozen embryos became Zoe - who weighed in at about 5 lbs or 2.5 kilos. Zoe and Professor Trounson set a bit of a trend and since then, of the three million or so babies born via assisted reproduction IVF techniques, some 20% or about 600,000 have been created from frozen embryos.

The world's first 'fresh’ test tube baby was Louise Brown born in England in 1978, but Zoe came from an embryo that had been frozen for a time before being thawed and implanted. To allow cells to survive liquid nitrogen temperatures (-196°C) the embryos had to be treated with cryo-protectant, then frozen down in the Planer freezer with extreme precision using different temperature ramps, before they could be stored in liquid nitrogen. This controlled rate freezing procedure was a breakthrough in 1984 but is now common and most IVF laboratories worldwide have rate freezers. Freezing an embryo allows physicians to replace one embryo at a time and store others or spares for later use; it may also help in allowing a patient to 'recover hormonal equilibrium' by delaying implantation to allow the IVF drugs to clear her body. Controlled rate frozen embryos appear to develop into equally healthy children compared with ‘fresh’ IVF ones. Recent studies from Denmark, Australia, the USA and Finland have indicated they may be even healthier. The freezing of embryos is becoming particularly important because of the interest in SET - selective embryo transfer - to help avoid multiple births and so a successful embryo freezing programme is essential for an IVF clinic.

The controlled rate freezing technique, originally suggested over thirty years ago by British Scientist Professor David Pegg, enabled Planer plc to pioneer this equipment. Many thousands of units are in constant use all over the world in IVF labs, hospitals and research institutions. Controlled rate freezing is needed before storing many cells in liquid nitrogen – in areas such as cord blood banking, bone marrow transplants, botanical matter, semen, oocytes, botanical seeds, skin, ovarian tissue, heart valves and blood vessels. 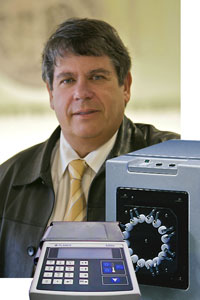 Professor Alan Trounson, currently president of the California Institute of Regenerative Medicine, became a world authority on assisted reproduction and went on to pioneer work in the stem cell field. Alan Trounson is now based in San Francisco and has had a highly distinguished career in assisted reproduction, stem cell and gynaecological research in academic institutions after Monash University in Melbourne.

Recently Louise Brown, the first IVF baby, had her own child naturally – Zoe has no such plans yet and having finished her degree is working in Melbourne.

Background Information: Alan Trounson is President of the California Institute for Regenerative Medicine in San Francisco, California. Prior to joining CIRM in January 2008, Trounson was Professor of Stem Cell Sciences and Director of the Monash Immunology and Stem Cell Laboratories at Monash University, where he retains the title of Emeritus Professor. Dr. Trounson founded the National Biotechnology Centre of Excellence – ‘Australian Stem Cell Centre’. He held various positions at Monash University beginning in 1977 and was appointed Director of the Centre for Early Human Development in 1985. He was awarded a Personal Chair in Obstetrics and Gynaecology/Paediatrics in 1991, and in 2003 was awarded a Personal Chair as Professor of Stem Cell Sciences. A Fellow of the Royal College of Obstetricians and Gynaecologists and an Honorary Fellow of the Australian and New Zealand College of Obstetricians and Gynaecologists, Trounson was awarded an honorary doctorate by the faculty of medicine at the University of Brussels. He has been a pioneer of human in vitro fertilisation (IVF) and associated reproductive technologies; the diagnosis of inherited genetic disease in pre-implantation embryos; the discovery and production of human embryonic stem cells and of their ability to be directed into neurones, prostate tissue and respiratory tissue. http://www.cirm.ca.gov