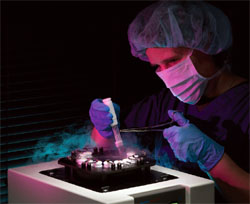 Researchers from St Mary's Hospital and Christie Hospital in Manchester, involved in the treatment of the couple who conceived using sperm frozen for twenty one years , published their case study in the June issue of the journal ‘Human Reproduction’. The baby boy was born after four cycles of IVF, using sperm frozen before his father, now aged 42, underwent treatment for testicular cancer at the age of seventeen.

The couple subsequently embarked upon four cycles of Intracytoplasmic Sperm Injection, better known by its short form ‘ICSI’, a fertility treatment commonly employed where the sperm are too weak to penetrate the egg. In this case although fertilisation and subsequent fresh embryo transfer were achieved in three out of the four cycles no pregnancies were achieved. Success was only finally achieved with the use of the last remaining viable embryo which had been cryopreserved in a Planer controlled rate freezer and placed in a long term liquid nitrogen storage vessel.

Based near London’s Heathrow airport, Planer were pioneering the controlled rate freezer around the same time as the patient’s sperm was originally being frozen. Cryopreservation had its roots in the ‘deep freeezing’ of avian sperm, which was commenced after the Second World War; human pregnancies using frozen sperm followed in 1955. The utilisation of 'rapid immersion in liquid nitrogen' methods for storing delicate and valuable samples did not always produce the necessary viability however and a 'step cooling' process, allowing a ‘difficult to freeze’ sample to equilibrate osmotically in cryoprotectant before cooling over predetermined ramps proved necessary.

Equipment for this controlled rate freezing process proved a spectacular breakthrough in the preservation of biological samples, such as human embryos, and Planer received the Queen's Award for Technology for it in 1984. Controlled rate freezing is now a universally established process for the pre freezing prior to long term storage of specimens ranging from human, such as bone marrow - to botanical, such as special seeds; Planer now sell their specialist freezing machines all over the world.