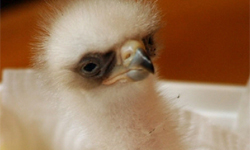 Scottish scientists have had a small breakthrough in their efforts to save endangered birds after they successfully bred a golden eagle using frozen sperm. A team from the University of Abertay Dundee managed to engineer the birth of a chick, called Crystal, who was hatched at a breeding centre in South Lanarkshire on 28 April 2004. Dr Graham Wishart, a biologist, and Andrew Knowles-Brown, an eagle breeder inseminated Crystal’s mother using thawed sperm which had been frozen for one month. There are many obstacles to breeding raptors in captivity naturally - the birds may not be ready to breed at the same time and, in the case of endangered species, it is often difficult to match up a breeding pair if the few remaining individuals are scattered across continents.

The freezing of sperm allows storage in near perpetuity, so for rare birds the optimum breeding conditions and any trans national programme can be managed. Before breeding Crystal, the Dundee team worked to improve the technique it used to breed an eagle using cryo-preserved sperm in May 2001, a world first. That eagle, a cross between a golden and a steppe eagle, was bred using sperm frozen at a slow rate. Following talks with raptor breeding experts in Spain, Dr Wishart and Mr Knowles-Brown used a Planer Kryo 10 controlled rate freezer to experiment with different cryo preservatives and freezing rates to obtain the optimal protocol for the process which was then applied via field freezing at the aviary concerned.