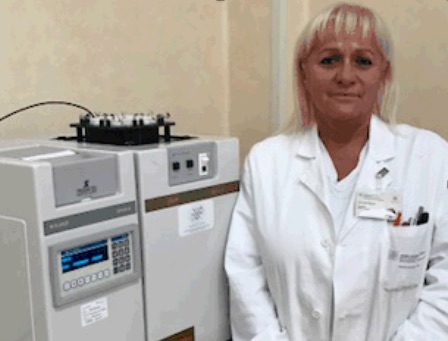 The Italian press reports that a woman gave birth, to a son from stored cryopreserved ovarian tissue retrieved while she was fighting cancer – the first such report from Italy.

Back in 2012 doctors told the woman, from Brescia and who is now thirty-five years old, that she had non-Hodgkin's lymphoma. She went to the Sant'Orsola hospital in Bologna for the removal of ovarian tissue, via anaesthesia and laparoscopy. The tissue was cryo stored with the aim of fertility restoration after her treatment of chemo- and radio-therapy and autologous bone marrow transplantation.

In an increasingly common procedure, the tissue is immersed in cryo-protectant solutions and is frozen in a series of cooling steps in a Planer controlled rate freezer, before being transferred for storage in a liquid nitrogen tank at -196 ℃. The controlled rate and gradual lowering of the temperature during the freezing helps the viability of the tissue post thaw.

In 2016 Raffaella Fabbri published a paper in The Journal of Ovarian Research, concluding that " ...ovarian tissue stored for 18 years showed a good morphology post thaw..."  and that long term storage does not impact tissue preservation.

With this patient, as is common, the outcome of the cancer treatment resulted in premature menopause and infertility. Four years later, after having recovered, she returned to Sant’Orsola hospital for reimplantation of thawed ovarian tissue. The team of specialists carefully transplanted a few pieces of tissue on both remaining ovaries. The first reimplantation showed few signs of recovery, so a second implant was undertaken and within two months a menstrual cycle reappeared, and a pregnancy was achieved two months later.

Raffaella Fabbri, pictured here, is the embryologist responsible for the ovarian tissue cryopreservation procedure at Sant'Orsola hospital along with biologists Dr Rossella Vicenti and Dr Maria Macciocca; Renato Seracchioli is the surgeon who carried out the actual reimplantation. To date, this technique has resulted in over 130 births from oncological patients worldwide.