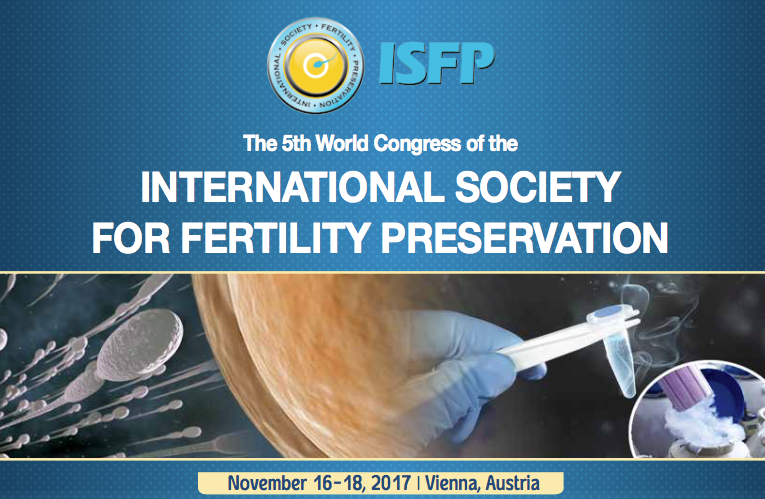 The 5th Biennial World Congress of the International Society for Fertility Preservation is being held in Vienna, Austria from November 16-18, 2017

The aims of this congress are to present and discuss important topics in the field such as advances in ovarian cortex transplantation, assessment of ovarian reserve, endometriosis, in vitro follicle growth maturation and artificial ovaries, medical protecting from chemotherapy, oocyte and embryo vitrification, reimplantation of ovarian tissue and many more cutting edge topics. There will be an opportunity for all to share protocols and clinical knowledge; to find areas for future multi-disciplinary scientific research and clinical collaboration; to spread education and to facilitate fertility preservation awareness. Fertility preservation is a substantial quality of life issue for young cancer survivors.

During the meeting there will also be practical workshops on cryopreservation of ovarian tissue with hands-on lab and clinics, tissue collection, lab preparation and tissue freezing, methods and transplantation techniques.

Planer equipment has been at the forefront of the development of the techniques used in fertility preservation with Planer controlled rate freezers being used in the cryopreservation of ovarian tissue in the majority of patients that have had successful births. We will therefore be attending this meeting to demonstrate our latest cryogenic equipment to this important and growing customer group.

For further information about the ISFP meeting please visit:
The 5th World Congress of the International Society for Fertility Preservation 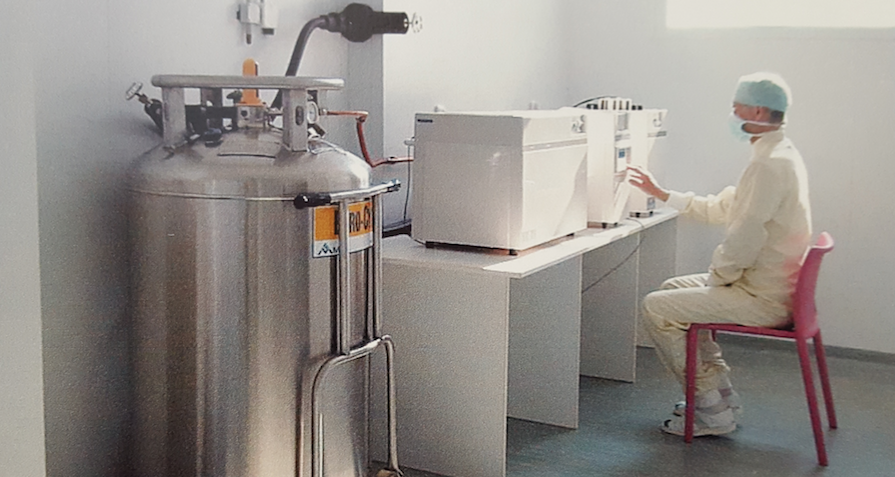 A recent study on cryo preserved grafts has been undertaken by Dr Pavel Mericka et al who performed a detailed evaluation of the factors around the discard of cryopreserved vascular allografts. The study looked at those manufactured in 2014 and 2015 at the Tissue Bank department of the University Hospital.  This tissue bank, operational since 1952, have been cryopreserving specimens since the 1980's using, inter alia, Planer freezers. In the study, all vascular grafts transported to the unit for processing and cryopreservation were included. This amounted to 78 vessels collected from 28 donors. In 2014, 57 vessels were collected, and in 2015, 30.

All the tissue vessels were collected aseptically during multi-organ harvests from deceased donors, aseptically processed in a clean room, cryopreserved in medium containing 10% DMSO and stored in the vapour phase of liquid nitrogen.

The researchers were looking at factors causing discard which included: contra indications of tissue post collection; deviation from the SOPs, problems in processing and storage and microbial contamination and in addition any severe adverse reactions by the graft recipient. The results from the total of 30 grafts not released for clinical use showed that microbial contamination occurred in 22 cases and was the largest cause. In their conclusions the authors point to these results confirming previous experiences - that the most frequent cause of tissue discard was microbial contamination. They do emphasise though the possibility of occurrence of other causes such as contraindication of tissue harvest found at autopsy or unexplained adverse reaction in the recipient of an organ originating from the same donor which should not be neglected.

The Havel Králové Tissue Bank is an institutional member of the European Association of Tissue Banks and annually delivers around 1000 grafts that are used in University and county hospitals as well as in surgeons' private practices.

Does the embryo freezing method have an impact on the birth weight of newborns from thawed embryo transfer cycles?  Prof Zhou and others from the Sun Yat-sen University Hospital in Guangzhou, China presented their finding as a poster (G17-1069) at ESHRE 2017 in Geneva. Their conclusion from a Large Scale Retrospective Study in Two Centers was that vitrification of cleavage stage embryos resulted in lower fetal birth weight compared to a slow-freezing method.

Prof Canquan Zhou (pictured here), Dr Fang Gu and others from the centres for reproductive medicines at the First Affiliated Hospital and the Jiangmen Central Hospital at Sun Yat-sen University in Guangzhou, China studied whether fetal birth weights were lower in a vitrified group than those in a slow-freezing group. A retrospective, two-center study was performed for 1797 singleton neonates born alive over 28 weeks of gestation after cleavage thawed embryo transfer was carried out in two large reproductive medical centers in South China, using the period January 2012 to December 2016. While vitrification was assumed superior to slow-freezing techniques regarding embryo survival rate and live birth rate the question of whether the vitrification cryopreservation method would affect fetal growth is still controversial.

This was a Retrospective study so the authors point out that research on long-term effects on the health of children are needed. Nevertheless they suggest vitrified embryo transfer seems to give rise to a decrease in neonatal birth weight, suggesting the potential epigenetic changes resulted from the high concentration of cryoprotectants should be carefully considered.

Prof Zhou uses a Planer cryogenic slow rate controllable freezer and the work was funded by the Chinese Ministry of Health through their public welfare scientific research special fund. 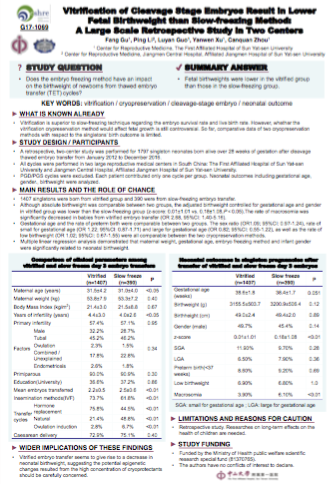 Cryopreservation and re-culture of a 2.3 litre biomass

In an article published in Plos One (August 25 2017) UCL researchers gave the first example of a large volume biomass being successfully cryopreserved in a single cassette and re-cultured. It demonstrates that a bioartificial liver device can be cryopreserved, and has wider applications to scale-up large volume cryopreservation.

The study optimised parameters such as excess media concentration and warming rates and used the findings to enable the successful cryopreservation of 2.3 litres of alginate encapsulated liver cell spheroids. The study of large volume cryopreservation is also essential to improve transplant results. Currently organs can only be preserved in a chilled state (typically between 0–4°C) for a maximum of between 4–24 h, depending on the organ. This greatly inhibits successful transplant numbers and outcomes.

For further information
Find full article at Plos One
http://journals.plos.org/plosone/article?id=10.1371/journal.pone.0183385

Planer will be exhibiting at the American Society for Reproductive Medicine (ASRM) conference again in 2017. This year’s event is being held in San Antonio, Texas from 28th October to 1st November and will be attended by several thousand delegates from around the world.

Come and see us on Stand 801
We would welcome any of our distributors and their customers to come and see us at this year’s conference – do let us know if you are planning to attend. We will have our new CT37stax incubator and DATAssure alarm and monitoring system on show so please encourage your customers to drop by Stand 801. 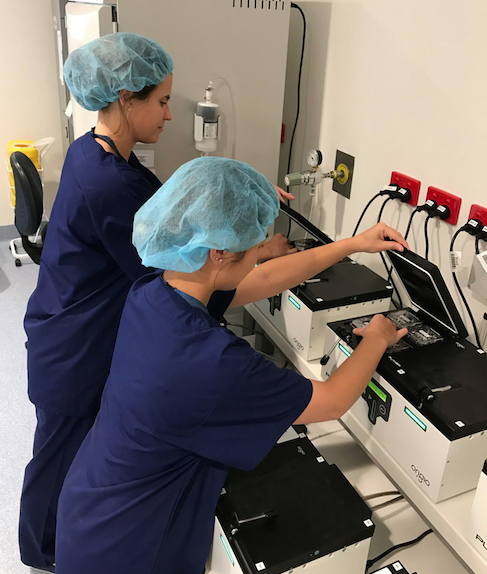 Since Primary IVF of Australia began operations in Sydney additional labs have been established. The first was in Melbourne but now, just opened, is Brisbane. In all over 600 babies have now been born who started life in BT37 incubators at Primary IVF.

Primary IVF offers affordable but specialist IVF care; it is part of group - Primary Health Care - and so able to use an extensive network of GPs, specialists and health professionals to provide a comprehensive approach to addressing fertility issues. Services are from all three labs with radiology, pathology and day surgery procedures on site at Sydney and Melbourne .

When setting up the Primary IVF labs their Scientific Director, Rosemarie Cullinan, thought carefully about the choice of incubators. “Having had experience with the Planer controlled rate freezers in the 1990s, a reliable workhorse, I had confidence that the BT37s would be built to the same high standard. The in-built battery was also a big plus for me. Along with the sleek design that suits our state-of-the-art laboratories!”

The BT37 benchtop was developed some ten years ago. It has accurate temperature control, systems for pH stability and regulated humidity. Accuracy and control of the chamber to obtain environmental homeostasis is important in cell development, helping to ensure an embryo suffers little exposure to temperature or pH level changes. 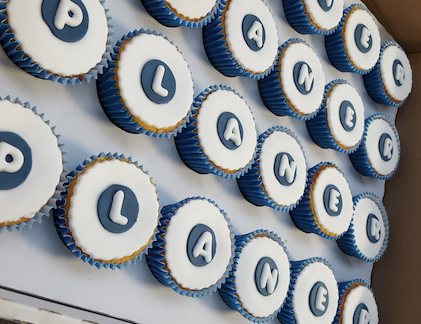 Planer recently attended and supported the 2017 Society for Low Temperature Biology meeting which took place at the Aurora, British Antarctic Survey, Cambridge, UK on the 19th and 20th September 2017.

The meeting was attended by international experts in cryopreservation from a large variety of different fields including human biology, research and plant cryopreservation. The presentations introduced the latest research on cryopreservation techniques relating to a wide range of topics. Of particular interest on the first day were the topics discussing the need for the reduction of DMSO concentrations in cryopreservation, the importance of regulated nucleation (seeding) and controlled warming which provided plenty of ideas for possible future product development.

The Society for Low Temperature Biology (SLTB) was founded in 1964 with the purpose of promoting research into the effects of low temperatures on all types of organisms and their constituent cells, tissues and organs. Such studies have applications in diverse scientific fields, from biology and medicine to engineering, conservation and environmental science.

The photo above shows our custom cupcakes - greatly appreciated by delegates at the break out sessions. 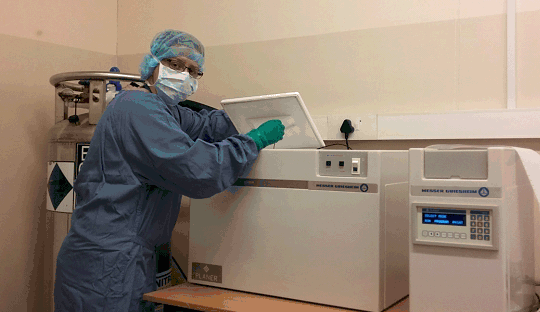 Under the shadow of old Table Mountain stands South Africa’s oldest university – The University of Cape Town. Within the University's prestigious Faculty of Health Sciences - considered one of the best faculties for medical research in the world - lies the Research Animal Facility (RAF), a department dedicated to supplying quality animal related procedure training, research animals and veterinary and para-veterinary technical assistance to researchers in various fields.  Working with animals in research is a privilege which should not be taken for granted or squandered. In order to ensure top quality research, the RAF supports and recommends the three R’s of research: Replace, Reduce, and Refine. These principles promote the replacement of animals with alternate models, reduction of the number of animals used in research, and refinement of protocols to ensure the animals’ welfare is considered during experiments in order to eliminate unnecessary suffering.

Striving to “practice what they preach”, the cryopreservation program was initiated. The aim of the program is to replace the mouse strains available to order as live mice with cryopreserved gametes instead. This is done by freezing embryos and sperm from the different mouse strains using a Planer Kryo 10 Series III controlled rate freezer. At an amazing 19 years+ of age this machine is almost as old as Table Mountain! The Planer has proven to be durable, dependable and downright dogged - attesting to the longevity of the product, which is serviced locally. Once frozen, the mouse sperm and embryos can be stored in liquid nitrogen indefinitely. This ensures that the valuable mouse strains are not bred when not in use nor lost when research comes to an end and can be re-derived (recreated) if a new research protocol begins. So while some ideas are put on ice, the Research Animal Facility’s dedication to excellent animal welfare and quality research provides the opportunity for those ideas to be thawed out and reborn in the future.