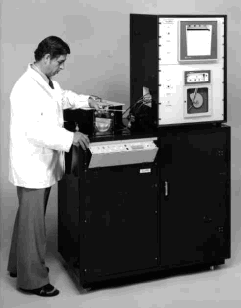 In the 1950s fowl sperm was first cryopreserved by a UK team led by Christopher Polge; the process was repeated in humans giving successful pregnancies. But the rapid immersion in liquid nitrogen gave viability problems for some samples – at that time embryos and bone marrow. As understanding of the freezing mechanism grew the importance of controlled or slow freezing for post thaw viability developed. In 1963, Peter Mazur, in the U.S., showed that damaging intracellular ice could be avoided if cooling was slow enough to permit sufficient water to leave the cell during freezing. Cryoprotectants, initially glycerol, protected the cells from freezing injury – both direct damage from ice crystal formation and from the increase in concentration of solutes. The controlled cooling process let these biological samples equilibrate osmotically in cryoprotectant via a series of cooling stages before their transfer to liquid nitrogen for long term storage; the first birth from frozen bovine embryo was reported in 1972 - using an early Planer machine.

Working with Prof David Pegg, Planer introduced controlled rate freezing equipment in the 1970s, first for animal embryos, with Professors Rawson and Wilmut pioneering the area, and then after 1984 in human IVF. In that year Drs Alan Trounson and Carl Wood in Melbourne helped Zoe Leyland into the world via a Planer freezer and she became the first human born from a frozen embryo. Two years later, April 1986, the first successful attempt at freezing and thawing of a human oocyte was reported in the Lancet by Dr Christopher Chen et al: a twin pregnancy was achieved using DMSO protectant and freezing in a Planer machine down from -7C to -36C followed by rapid freezing to -196C before storage in liquid nitrogen.  Research into freezing other material continued and in 1991 arterial graft material was frozen successfully for the first time and in 2004 the longest successful storage of sperm was reported by doctors from St. Mary's Hospital and Christie Hospital in Manchester, UK who worked with a couple who conceived using sperm frozen down in a Planer controlled rate freezer, and then stored for twenty one years.

In 1997 a patient, Ms Touirat, in Belgium had parts of her ovaries removed and controlled frozen in a Planer machine before beginning treatment for Hodgkin's lymphoma which would necessarily leave her infertile. In 2003, free of the cancer, a Belgian team under Prof Donnez thawed and reimplanted and she became the first woman in the world to give birth to a healthy baby following such a graft.  More lately, in 2014, Prof Bruce Campbell of Nottingham, UK, reported (in ‘Human Reproduction’) he had successfully frozen and transplanted a whole ovary - the first frozen organ from an adult large mammal successfully transplanted.

There are some 10,000 Planer temperature control machines that have been sold around the world since the company started in 1974. Used for freezing precious samples in use for human, animal and cell biology – samples like oocytes, skin, blood products, bone marrow, embryos, sperm, stem cells, tissue they are found in hospitals, veterinary practices and research laboratories everywhere.