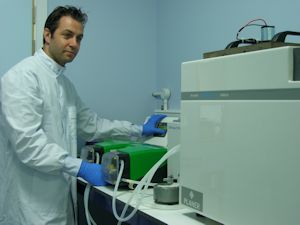 A new article by Dr Alasdair Kay et al in Cryobiology has just been published. The paper gives the results of Dr Kay's investigations taking a liquidus tracking approach to the cryopreservation of human cartilage allografts. He used our special slow vitrifier - Liquidus Tracker - controlling both the temperature and the concentration of cryoprotectant so that the solution composition "tracked" the liquidus (melting point) line for that system. Ice crystal formation was prevented and the tissue was not exposed to CPA concentrations exceeding those experienced by cells during conventional cryopreservation.

This approach could be particularly appropriate for articular cartilage because chondrocytes in situ are susceptible to damage by the crystallisation of ice. This project aimed to investigate possibilities for a suitable process for tissue to be used in the surgical repair of damaged human knee joints. In this experiment, human articular cartilage was obtained from deceased donors and dimethyl sulphoxide (DMSO) was used as the CPA, with cooling at 0.14°C/min and warming at 0.42°C/min.  A program of increasing DMSO concentration was developed for cooling and this gave satisfactory tissue concentrations. Reduction of DMSO concentration during warming proved inadequate and firm conclusions were restricted by two factors: the broad spread of replicate data and the possibility that there might be significant non-solvent water interfering with DMSO concentration measurements. Empirical trials to optimise the system were inconclusive; the next steps indicated would be to resolve the problems of possible non-osmotic water in human cartilage and the provision of consistent quality tissue. A look at further optimisation of the rewarming phase would also be beneficial. Dr Kay worked for the R&D Tissue Services, NHS Blood and Transplant at Speke, Liverpool. His co authors were Messrs Hoyland, Rooney, Kearney and Pegg . See full details in "Cryobiology"