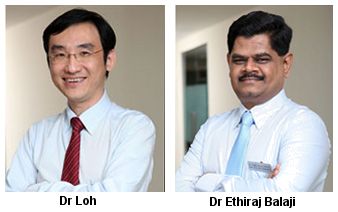 A recent report in Human Reproduction tells of the first pregnancy and live birth resulting from cryopreserved embryos which came from in vitro matured oocytes after an oophorectomy in an ovarian cancer patient.

This work was accomplished at KK Women's and Children's Hospital, Singapore, where the team performed in vitro maturation (IVM) of immature oocytes retrieved from surgically resected ovaries.

In this case report, Dr Balaji and team, under the leadership of Dr Loh, presented both pregnancy and then live birth from a young patient, with stage IIIC ovarian cancer, who had undergone fertility sparing surgery. The immature oocytes recovered after oophorectomy were fertilised after IVM. The embryos obtained were cryopreserved using a Planer freezer, and later transferred. The transfer achieved a singleton healthy pregnancy leading to a live birth.

Dr Loh Seong Feei has been the Medical Director of Thomson Fertility Centre since January 2012 and heads the team of professionals there. Prior to joining Thomson Fertility Centre, Dr Loh was the Head Consultant at the Department of Reproductive Medicine as well as the Director of the KKIVF Centre. Dr Balaji is the Chief Embryologist at Thomson Fertility Centre. During his previous 17 years as chief embryologist at KKIVF, he managed the IVF and Andrology labs as well as the National Sperm bank of Singapore. Under his headship, the KKIVF centre handled 1500 fresh IVF cycles per year; 900 frozen ET a year; 400 IUI with super-ovulation per year and 2300 semen analyses per year.