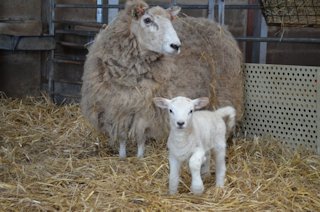 In an important paper just published in Human Reproduction, Prof Bruce Campbell and his team at the School of Medicine, Nottingham set out some exciting results on the restoration of fertility - the cryo-preservation and transplantation of whole adult sheep ovaries.

This is the first time that a whole organ from an adult large mammal has been successfully frozen, successfully transplanted and has successfully produced immediate results.

Premature ovarian failure affects 1–2% of all women and is due to a number of causes - such as genetic predisposition and cancer treatment. Using a new method, a Planer controlled rate freezer and a different post operative regime, Prof Campbell and team restarted 100% of the ovarian function and produced high rates of natural fertility in his sheep: pregnancy rate 64%; live birth rate 29%.

Freezing and subsequent transplantation require successful cryo-preservation of both the ovary and its vascular supply. Work to date has not been so successful; five years ago a delivery was made, but 545 days after transplantation and the follicular survival rate in the grafted ovaries was only 1.7%–7.6%. The Nottingham work involved adult sheep, rather than lambs, where ovaries are more typical of human ovaries but much harder to freeze - and was immediately successful.

What the Nottingham team discovered was that the duration of cryo-protectant perfusion was highly significant and that the degree of this penetration - and the maintenance of post-operative vascular viability - were the critical determinants of success. Current methods of transplanting fragments of ovarian cortex have some drawbacks in that these fragments contain only a fraction of a woman's ovarian reserve, and so can provide the recipient with a relatively brief fertile window before the supply of oocytes contained within their graft is used up. The problem of longevity of the actual graft may be exacerbated by the freeze-thaw process and high rates of follicle loss occurring. The cryogenic preservation of the whole ovary, complete with vascular pedicle, for later transplantation provides a promising alternative strategy.

Tissue cryo-preservation methods require the replacements of intra-cellular water with penetrating cryo-protective agents. During organ preservation this has usually been tried by vascular perfusion. The new Nottingham technique, using Planer special slow rate freezing equipment, has the advantage of providing very short diffusion distances for the cryo-protectant to penetrate. The cellular injury and loss caused by the formation of intra-cellular ice during cooling and warming can usually be avoided using controlled rate slow freezing methods, whereas the formation of ice in extracellular locations, and particularly in blood vessels, can produce serious injury and prevent organ function.

Before this technology can be used in human preservation the perfusion rates and the levels of anti-coagulant will need to be optimised for different sized ovaries and of course trials on the normality of offspring will be required. Additionally it could also perhaps be applied to the cryo-preservation of other  organs and even one day major ones such as kidneys where there are considerable difficulties in storing donated tissue. Although an organ, the ovary is small - though still with multiple cell types and a separate blood supply. So far attempts to freeze and store larger whole organs such as the heart, liver and kidney have proved unsuccessful. The primary challenge with whole organ cryo-preservation is that of preserving an intact vascular system and the Nottingham work, funded by the UK's Medical Research Council - is a major step in the right direction.